Why should it be that some of the most brilliant and highly educated people I know are forced to beg for jobs and justify their work to managers who, in all likelihood, might have spent a greater part of their business program drunk than studying? Sure there are probably some useful tasks that managers and supervisors perform, and some of them are no doubt perfectly wonderful people. Nevertheless, why should they sit at the top of the hierarchy of the contemporary firm while highly skilled technologists just do what they are told? Why should those who design and build new technologies or solve tenacious scientific problems receive a wage and not a large share in the wealth they help generate? Most importantly, why do so many highly skilled and otherwise intelligent people put up with this situation? 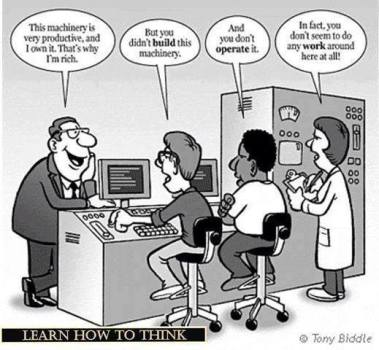 There is nothing natural about MBAs and other professional managers running a firm like a ship’s captain. As Harvard economist Stephen Marglin illustrated so well, the emergence of that hierarchical system had little to do with improvements in technological efficiency or competitive superiority but rather that it better served the interests of capitalist owners. What bosses “do” is maximize the benefits accruing to capitalists at the expense of workers. Bosses have historically and continue to do this by minimizing the scope each individual worker has in the firm and inserting themselves (i.e., management) as the obligatory intermediary for even the most elementary of procedures. This allows them to better surveil and discipline workers for the benefit of owners. Most highly skilled workers will probably recognize this if they reflect on all those seemingly pointless memos they are forced to read and write. Of course, some separation of labor (and writing of memos) is necessary for achieving efficient production processes, but the current power arrangement ensures that exactly how any process ends up being partitioned is ultimately decided by and for the benefit of managers and owners prior to any consideration of workers’ interests.

Even if one were not bothered by the life-sucking monotony of many jobs inflicted by a strict separation of labor, there is still little reason why the person in charge of coordinating everyone’s individual tasks ought to rule with almost unquestioned authority. This is a particularly odd arrangement for tech firms, given that scientists and engineers are highly skilled workers whose creative talents make up the core the company’s success. Moreover, these workers only receive a wage while others (e.g., venture capitalists, shareholders and select managers) get the lion’s share of the generated wealth: “Thanks for writing the code for that app that made us millions. Here, have a bonus and count yourself lucky to have a job.”

Although frequently taken to be “just the way things are,” it need not be the case that the totality of the profits of innovation so disproportionately accrue to shareholders and select managers. Neither does one need look as far away as socialist nations in order to recognize this. Family-owned and “closely held” corporations in the United States already forgo lower rates of monetary profit in order to enjoy non-monetary benefits and yet remain competitive. For instance, Hobby Lobby, recently made infamous for other reasons, closes its stores on Sundays. They give up sales to competitors like Michaels because those running the firm believe that workers ought to have a guaranteed day in their schedule to spend time with friends and loved ones. Companies like Chick-Fil-A, Wegman’s and others pay their workers more livable wages and/or help fund their college educations, all practices unlikely to maximize shareholder value by any stretch of the imagination.

At the same time, the hiring process for many managers does not lend much credence to the view that their skills alone make the difference between a successful or unsuccessful company. Michael Church, for instance, recently posted an account of the differences between applying to tech firm as a software engineer versus a manager. When interviewing as a software engineer, the applicant was subjected to a barrage of doubts about their skills and qualifications. The burden of proof was laid on the applicant to prove themselves worthy. In contrast, when applying for a management position, the same applicant was seen as “already part of the club” and was targeted with hardly any scrutiny at all. This is, of course, but one example. I encourage readers to share their own experiences in the comments section. Regardless, I suspect that if management is regularly treated like a club for those with the right status rather than the right competencies, their skills may not be so scarce or essential as to justify their higher wages, stake in company assets and discretion in decision-making.

Young, highly skilled workers seem totally unaware of the power they could have in their working lives, if enough of them strove to seize it. I am not talking about unionization, though that could also be helpful. Instead, I am suggesting that scientists and engineers could own and manage their own firms, reversing (or simply leveling) the hierarchy with their current business-major overlords. Doing so would not be socialism but rather economic democracy: a worker cooperative. Workers outside the narrow echelon of managers and distant venture capitalists could have stake in the ownership of capital and thus power in the firm, making it much more likely that their interests are better reflected in decisions about operations and longer-term business plans. Just imagine marketing and business majors having to justify their skills to the engineers and scientists considering hiring them!

There is no immediately obvious reason why scientists and engineers could not start their own worker cooperatives. In fact, there are cases of workers less skilled and educated than the average software engineer helping govern and earning equity in their companies. The Evergreen cooperative in Cleveland, Ohio, for instance, consists of a laundry – mostly serving a nearby hospital, a greenhouse and a weatherization contractor. A small percentage of each worker’s salary goes into owning a stake in the cooperative, amounting to about $65,000 in wealth in roughly eight years. Workers elect their own representation to the firm’s board and thus get a say in its future direction and daily operation.

Engineers, scientists and other technologists are intelligent enough to realize that the current “normal” business hierarchy offers them a raw deal. If laundry workers and gardeners can cooperatively run a profitable business while earning wealth, not merely a wage, certainly those with the highly specialized, creative skills always being extolled as being the engine of the “new knowledge economy” could as well.

The main barrier is psychological. Engineers, scientists and other technologists have been encultured to think that things work out best if they remain mere problem solvers – more cynical observers might say overhyped technicians. Maybe they believe they will be one of the lucky ones to work somewhere with free pizza, breakout rooms and a six figure salary, or maybe they think they will eventually break into management themselves. Of course there is also the matter of the start-up capital that any tech firm needs to get off the ground. Yet, if enough technologists started their own cooperative firms, they could eventually pool resources to finance the beginnings of other cooperative ventures. All it would take is a few dozen enterprising people to show their peers that they do not have to work for scraps (even if there are sometimes large paychecks to go with that free pizza). Rather, they can take a seat at the table.

1 thought on “Why Are Scientists and Engineers Content to Work for Scraps when MBAs get a Seat at the Table?”